Mayor Michelle Wu joined Mattapan residents for a Neighborhood Coffee Hour and the official reopening of Walker Playground at 550 Norfolk Street on June 30.

The event marked the last of Mayor Wu’s regularly scheduled 2022 Neighborhood Coffee Hours and the unveiling of more than $1.7 million in park improvements. The Walker Playground renovations were originally proposed as a playground and water play project since the courts had recently been redone.

“Thanks to our discussions with abutters and park users in this historic part of the city, we were able to update Walker Playground to better serve residents of all ages,” said Parks Commissioner Ryan Woods. “Through the input and advocacy of the neighborhood we realized we could offer more than just a field renovation, resulting in the comprehensive facility that we see today.”

After receiving input from the Mattapan community, the scope of the project was expanded to include upgrading the field, enhancing all entrances including formerly non-ADA compliant entrances, repaving pathways including a walking loop around the field, adding a drinking fountain, solar benches, and lighting along the walking loop and throughout the park, repairing the shelter roof, and adding a police call box.

The total budget of $1,762,600 was provided by the Mayor’s Capital Improvement Plan including $680,000 in funding provided by the Community Preservation Act for the field while the drinking fountain and solar benches were funded through Youth Lead the Change.

For more information, please contact the Boston Parks and Recreation Department at (617) 635-4505. Stay up to date with news, events, and improvements in Boston parks by signing up for our email list at bit.ly/Get-Parks-Emails and following our social channels @bostonparksdept on Twitter, Facebook, and Instagram. 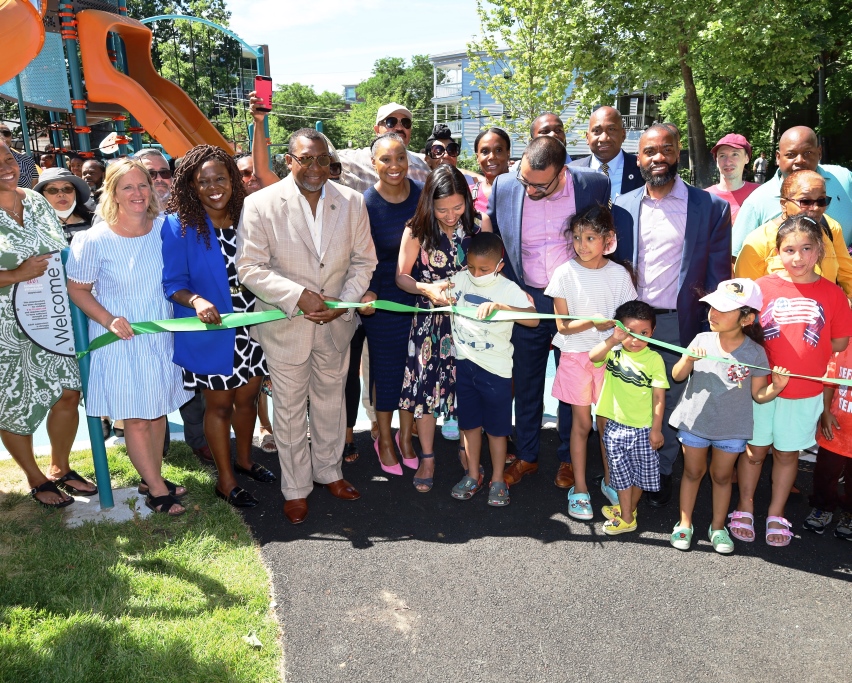 Mayor Michelle Wu cuts the ribbon on more than $1.7 million in improvements to Walker Playground with the help of local youngsters and City and State officials during the Mayor’s Neighborhood Coffee Hour on June 30. (Photo: Jon Seamans)