Stories from Mount Hope: The Sailor Preacher of Ocean Avenue

The Boston Seamen’s Port and Aid Society’s lot on Ocean Avenue in Mount Hope Cemetery is a tall, black granite monument crowned with an urn, it honors Rev. Edward T. Taylor. Taylor was arguably the city’s most flamboyant and popular preacher in his era.

In the Boston Seamen’s Port and Aid Society’s lot on Ocean Avenue at the far end of Mount Hope Cemetery is a tall, black granite monument crowned with an urn on which is carved:

North Square is better known today as the location of the Paul Revere House, but in pre-Civil War Boston, Rev. Taylor of North Square was arguably the city’s most flamboyant and popular preacher; even Charles Dickens wrote about him.

Taylor was born in Richmond, Virginia, when George Washington was president.  He was given up to a foster family.  In 1800, at about the age of 7, he ran away to become a sailor.

In that year – or 1803, accounts vary – Taylor took up the offer of a ship’s captain and became a commissioned seaman on a Spanish sloop of war patrolling the Caribbean.  In 1811, the ship he was sailing on called at the port of Boston.  He settled in Boston and became a converted Methodist after hearing a sermon at Park Street Church.

At the outbreak of the War of 1812, he joined an American privateer chasing down British ships, when he was captured and imprisoned in England.  Released after the war, he returned to Boston and became an itinerant Methodist preacher, traveling to towns from Marblehead to Duxbury and meeting with groups of sailors and dock workers.

In 1819 he married Deborah Millett, also a fervent Methodist, whom he met on a tour of Saugus.  Father and Mother Taylor, as they became known, returned  to Boston and North Square in 1829.  Father Taylor was chosen Mariners Preacher by the Port Society of Boston, which had been incorporated that year to provide aid to seamen from the ships docked nearby.

By then, Taylor’s boisterous preaching style was well known; it featured his Biblical teachings sprinkled with seaman slang and nautical terms.   In 1871 his biographer, Gilbert Haven, called him “a shouting Methodist in a Unitarian city.” 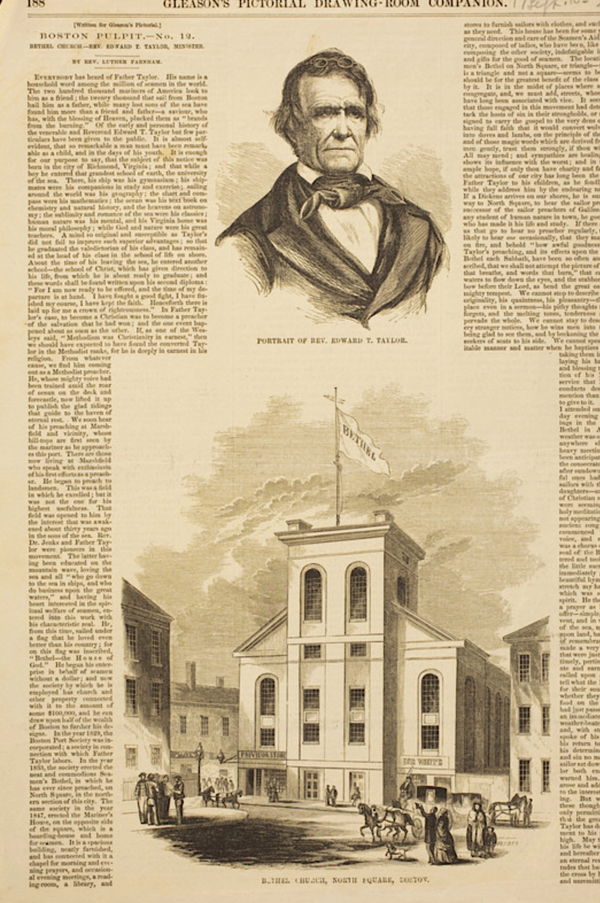 Bethel, capable of holding 1500, in North Square nearly opposite the Revere House.  The 1½-story brick church with a Quincy granite base was characterized by a central tower and flanking wings and attributed to noted architect Gridley J. F. Bryant.

Taylor lived with his wife and their six children in a townhouse at 4 North Square (still standing although much altered).

Charles Dickens visited in 1842.  On his first visit to the United States, Dickens docked at Boston on January 22, and a few days later he walked from the Parker House to nearby North Square and found Father Taylor.  Writing in American Notes (1842), Dickens described his visit to the Bethel:  “The only preacher I heard in Boston was Mr Taylor who addresses himself peculiarly to seamen. I found his chapel down among the shipping in one of the narrow old water-side streets, with a gray-blue flag waving freely from the roof. The preacher was already seated in the pulpit. He looked a weather beaten hard featured man of about 56.” Actually Taylor was 48.

Dickens described Taylor’s sermon at length, which was taken from the Book of Solomon:  “His imagery was all drawn from the sea and from incidents of a seaman’s life and was remarkably good.”

Taylor was a member of the Lodge of Freemasons, The Knights Templar of Boston and the Odd Fellows (Suffolk Lodge).  He was anti-slavery and, as Haven wrote, “partial to people of color with a Southerner’s partiality.  He cherished always a kindly feeling for Virginia.” But, he hated abolitionists, because they attacked the church and “they have cursed the land,” as Haven quoted him.  Still, Rev. Taylor helped raise funds with Governor John Andrew to recruit soldiers for Massachusetts rifle companies during the Civil War.  By 1867, he was slowing down and had largely retired.

His wife, Deborah,  died at the age of 74 and was buried in the recently acquired Port Society lot.  A 1904 biography describes the day that “Mother Taylor went home on June 19, 1869 in Mt Hope Cemetery.”  Taylor died on April 6, 1871, or as Haven wrote, “he hoved to port and dropped anchor.”  He was buried on a rainy day, with the service attended by sailors, clergy, Odd Fellows and members of the Port Society.  “A long procession bore his body to Mt Hope Cemetery (still part of West Roxbury/Jamaica Plain) on the edge of the city.  He often said that he wanted to be buried near or on the ocean, so the Ocean he desired to be buried near is found on that Avenue.”

Both Edward Taylor and his wife were buried beneath marble scrolls set at the edge of the lot (likely an underground vault) inscribed simply “Mother” and “Father.”  Both stones are still in place today, although Father Taylor’s scroll is tipped over; both were set up at a later date on granite blocks.  The black granite monument was erected about 1900 with the names of  the Taylors and their family members.

The Seamen’s Bethel fell on hard economic times after Father Taylor died. In 1884 it was sold to the Catholic Church as a mission to the growing Italian community around North Square. 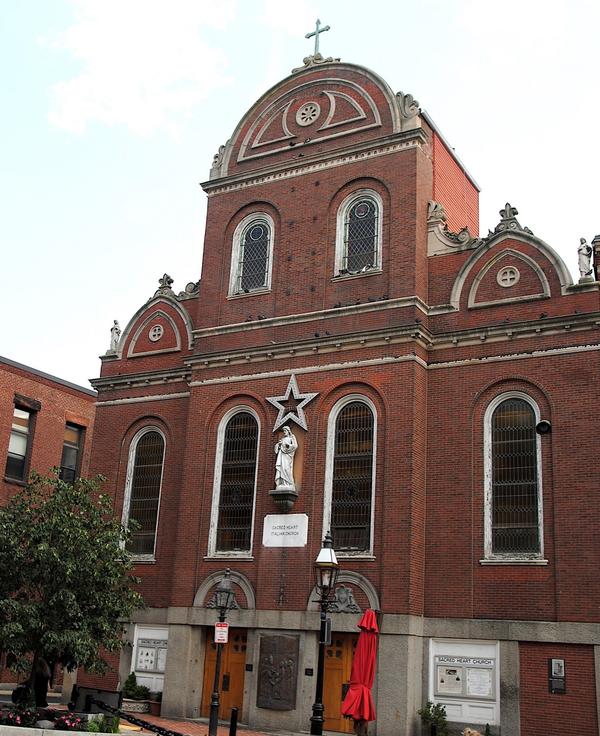 In September, 1888, it became the first Italian Catholic Church in Boston, when a priest from Italy was assigned to the newly named Sacred Heart Italian Church. The exterior is substantially the same as in Father Taylor’s time.  The church was remodeled about 1910, with tall round arched windows in the center bay and arched brick parapets with inset moldings at the roof  line.  In the center bay is a star, an inset statue of Christ and a marble block carved with words for everyone in North Square to read, “Sacred Heart Italian Catholic Church.”

Haven, Gilbert with Thomas Bennett. Collector of the Port of Boston,  Edward T Taylor, For Forty Years Pastor of the Seamen’s Bethel, Boston, 1871.